Jules and Juliette are the center of the pop rock duo/ band called “Firebug”. Having just released a new single called “Follower” via Spectra Music Group, they will be unleashing a full record on April 6th entitled: “Wandering Soul”.

Having traveled from place to place, the group’s influences are vast and reflect in their music. The Chicago born couple have a lot to give to an audience and often play live. I spoke with them about their music, and they proved to be a lot of fun and quite prolific.

You are a really cool talent; how did you guys originate?

Juliette: We were both looking to form a band, and that’s how we met. We’re both from Chicago. After a brief time of being together in Chicago we moved out to Los Angeles. While we were there we booked up a storm and then moved to New Orleans for a few years. After we stayed in New Orleans for a little while we decided to come back to LA. Now we are east of Los Angeles in the Joshua Tree area.

Jules: We met in Chicago and that’s when we formed our band. We are both from Chicago originally.

Is it just the two of you?

Jules: Yeah, we are pretty much the core of the band. Like the Eurythmics.

So, you have a new release?


Jules: We just released a single on Spectra called, “Follower”. It’s been out a few weeks on iTunes, and we are actually making a video for that right now out here in the desert. Our full release which is going to be called, “Wandering Soul”, will be out on April 6.

Who writes the songs?

Juliette: We both do, but mainly me. I write all the lyrics and a lot of times I come up with song ideas. I’ll have the lyrics, melody, and music and then Jules will add to it. Sometimes he’ll come up with the music. We both play guitars, but Jules is mainly the guitar player.

Do you perform live often?

Jules: Yes, we do. Right now, we’re trying to piece the players around us to go out there with a full band, but her and I perform as a duet as well. That’s what we have been doing since we’ve arrived here. We have a few shows coming up, about 15 shows.

Juliette: Which is a lot. We arrived here only a few months ago. We’ve been very fortunate, we’ve met a lot of really cool people here. So, we’re feeling pretty good about our decision to move here. There were some really creative and awesome people that live in this area.


Jules: So, getting back to the ” Following” release and our connection with Joshua Tree, about four years ago we recorded half of our record here. We did the rest in New Orleans. The record is kind of a combination between two places. 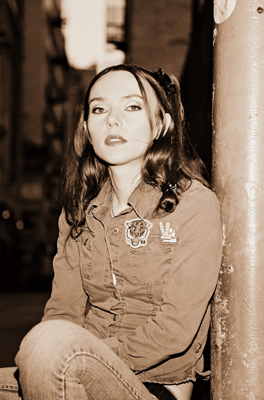 Where would you like to go with your music? Where do you want to be say in a year’s time?

Jules: We’d like to be on the road playing music festivals, touring Europe and just getting our music out there to a wide variety of people. Our sound crosses over to different genres.


Juliette: We are a rock band, but we have different influences. I think that’s what Jules is trying to say. We hit all people that listens to different kinds of popular music. Not everyone of course but a lot of people do pick up on it. Sometimes we have the ability to cross over. Hopefully within a year will have a larger audience who will get to hear our music. Hopefully will play in more places and for more people.

Are you two a couple?

Jules: Yes. It’s a balancing act but we love what we do, we love each other and we’re just trying to keep the wheels turning and keep on moving because with these times and such, it’s good to navigate because everything is constantly changing. You don’t have to reinvent yourself all the time, but you have to definitely keep on top of all the different changes and stay focused.

Make sure everyone picks up the new single “Follower” which is out now at iTunes, Amazon, Spotify and more and get the entire new album out April 6th called “Wandering Soul”.

@TheCrowleysBand are four good boys that enjoy looking for an Old Milwaukee Ice sponsorship, playing D&D in the van between gigs,…